A Spaceship For The Sea 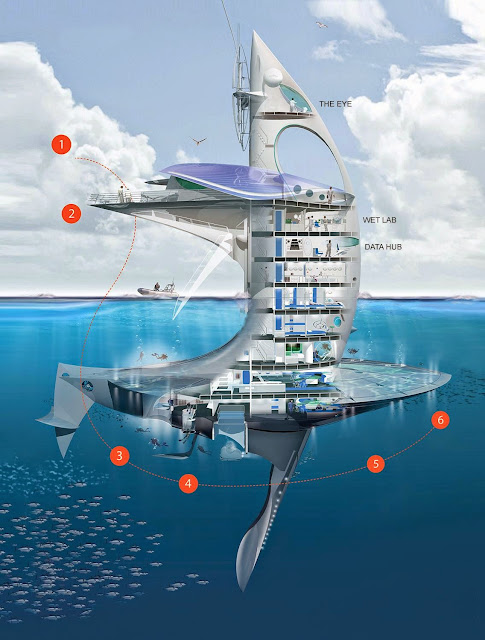 Scientists know more about the surface of the moon and Mars than they do about our own seafloor. Which helps explain the grand vision of the French architect Jacques Rougerie, who’s designed an ocean-going laboratory that rivals the Starship Enterprise in scope.
Rougerie envisions his machine, the SeaOrbiter, as a sort of space-age buoy floating unobtrusively in the ocean, equipped with submersibles and a team of divers who can explore and analyze the marine environment. “If we want to better understand the ocean, we need a paradigm shift in research,” he says. That means direct observation in remote locations like the Sargasso Sea, where forests of seaweed create a unique and poorly understood ecosystem. “Eels from North America and Europe converge here to spawn after spending decades in freshwater rivers,” says Sylvia Earle, a marine biologist and former National Oceanic Atmospheric Administration chief. “We know very little about this place, and it’s home to one of the most unusual life histories of any animal in the ocean.
” SeaOrbiter’s price tag—$48 million—is its biggest drawback. But, thanks to the French crowd-funding site KissKissBankBank, Rougerie and his team have raised $475,000 to begin construction of the orbiter’s eye later this year. If they can inspire deep-pocketed donors to fund the full amount—a big if, admittedly—they hope to finish the ship by the end of 2016.

1. The Eye: From this post, scientists could track migrating birds and sea life and conduct long-term meteorological studies.

2. Topside Operations: Pilots would control SeaOrbiter’s remotely operated vehicles (ROVs) from above the waterline. The outdoor operations area would also serve as a staging area for dives from the surface. And a decompression chamber would ease the transition for SeaOrbiter members living at saturation. Solar panels and wind turbines would provide energy to help power the ship.

4. Four-Car Garage: The underwater hangar would house a two-person submersible, two ROVs, and an autonomous drone that can dive to 6,000 meters. The hope is to use these vehicles to search the ocean depths for not only new life but also plankton, bacteria, and viruses that could help treat disease.

5. Data Hub: Communications Center Nemo, named after the anti-hero of Jules Verne’s sci-fi masterpiece 20,000 Leagues Under the Sea, would serve as a broadcast studio for SeaOrbiter to share its discoveries with the world. The studio would also house a pipe organ, the favored musical instrument of Verne’s mad captain, who swore off life on land to pursue the mysteries of the abyss. (One crazy French science-fiction writer’s dream is apparently another French explorer’s reality.)

6. Undersea Quarters: Six crew members would live in a pressurized zone underwater, allowing them to dive all day to 100 meters. By living at saturation, they could complete experiments much more efficiently than land-based marine biologists do, and they wouldn’t need to bother with decompression stops upon returning to the ship. The pressurized quarters could also double as a simulator for space agencies to test operational protocols and perform psychological studies on long-term close-quarters living for future trips to space
Posted by Unknown at 07:46